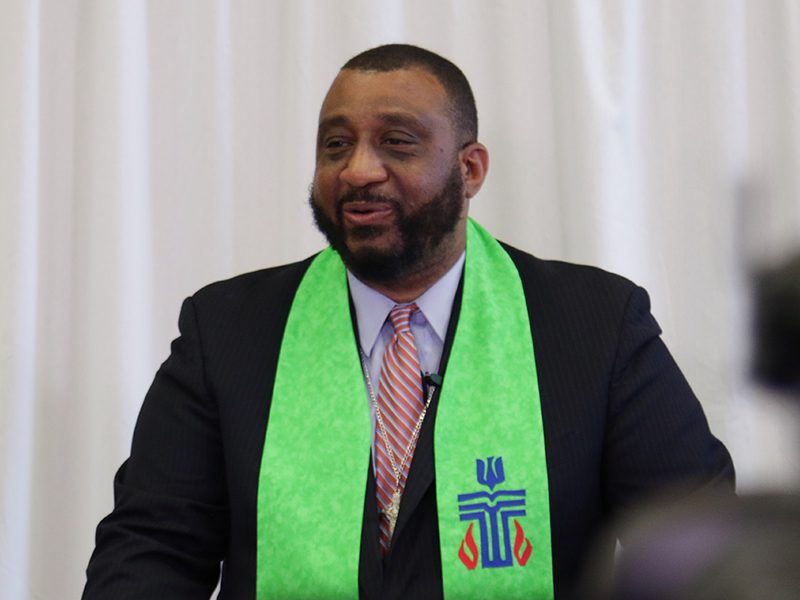 The scariest part of Day 3 of the 224th General Assembly was the budget report. The income projections undergirding the 2021-2022 budgets need to be revised downward, significantly downward. They anticipate mission income to be down by 25% in 2020 and 2021 and by 20% in 2022. They also expect per capita income to decrease by 35% due to declining membership and a higher rate of unpaid assessments. I don’t know if that got the commissioners attention. It got mine.

A commissioner asked how much we were saving by having the General Assembly online rather than meeting in Baltimore. The answer was $2.4 million, which is good; however we’re also looking at $2.7 million lower in per capita income, which is not so good.

In some ways, that report was just a blip during the day. It would be easy to overlook because there were so many positive things that happened.

We began with worship. The outgoing co-moderators, Cindy Kohlmann and Vilmarie Cintrón-Olivieri, delivered a powerful message that I would listen to again. We have been blessed by their leadership.

New co-moderators Elona Street-Stewart and Gregory Bentley handled things very well for their first day on the job. I think, however, that Rev. Bentley must have drawn the short end of the straw because the plenary that he moderated involved more parliamentary procedure and patience than the one Street-Stewart had to handle.

After a brief devotion to open that afternoon session, we jumped right into it with the reconsideration of Item 01-04, which dealt with items to be referred to the 2022 GA. It was a fair question. There were a number of people waiting in queue to ask for items to be taken off that list so they could be dealt with this year when the Assembly decided to draw the line late last Friday night. In the end, the Assembly decided to keep the line where it was and turned down the motion to reconsider 97-377. It may not have been fair, but it was a prudent decision.

Commissioners then heard the budget report and after that started to deal with the items that had been taken off the consent agenda. That included approving Jihyun Oh as Associate Stated Clerk, approving the nomination of the Rev. Amanatha Barbee and Rev. Neal Presa to the 11th Assembly of the World Council of Churches, approving the list of churches to invite as Ecumenical Advisory delegates to the 2022 General Assembly, and establishing a General Assembly Administrative Commission to deal with Mid Councils. All of these were passed by overwhelming votes.

The only one that had any controversy at all was the approval of board members of the Presbyterian Investment and Loan Program. Someone rightly objected that 5 of the 6 nominees were male and that a significant majority of those currently serving on the board are also male. The response was that as recently as 2015 the majority of the board were women and that the reason for the lack of balance of this slate was due to a lack of qualified female nominees. Although that may be true, it also seemed like a weak excuse. Nevertheless, the Assembly approved the nominees presented by a vote of 436-34.

The Assembly then took up 00-29, On the Church in This Moment in History, which was the attempt to respond to the outcry for racial justice sparked by the death of George Floyd. To be honest, the original proposal was pretty bland. Someone moved to amend it by asking the Stated Clerk to sign on to the Open Letter to Our Nation’s Lawmakers on Systemic Racism that was offered by the Poor People’s Campaign: A National Call for Moral Revival and to ask the Presbyterian Mission Agency to use that letter to support and encourage churches to use this letter as an educational tool and call to action. We took a 10 minute break so that commissioners could read it. That was eventually approved by a vote of 306-172.

Then there was a substitute motion, which required a five-minute break, so commissioners could read it. There were then several amendments added to clarify that Black Lives Matter, and to clarify that attending to the pain, suffering, and long-standing oppression of our BIPOC siblings in Christ is central to our work of proclaiming the Gospel of Jesus Christ. (BIPOC stands for Black, Indigenous, People of Color. Apparently that’s a term that is gaining popularity in social justice circles.) There was a motion to defer action on this until Saturday, so people had a chance to reflect on it. Commissioners declined to take that opportunity. There was an objection that the substitute motion didn’t mention black women and girls, although it does refer to the Freedom Rising Initiative, which focuses on our work with black men and boys. Although that generated some sympathy, the Assembly decided not to take this up. The Assembly then voted to make the substitute motion the main motion and then approved that motion 407-72. You can read it here, and I would encourage you to look at this. It represents good work and careful thought, and it appropriately pushes us toward action on these important issues.

Not surprisingly, all of this took time, pushing us past our scheduled adjournment. So, the Assembly took a dinner break of about an hour and reconvened at 7:30 p.m.

The first item the Assembly dealt with after the break was 00-30, On Responding to the Covid-19 Pandemic. This was much better written than 00-29 and was adopted by a vote of 419-4. I would also encourage you to read it.

It was then decided to return to item 00-30, and after agreeing to reconsider it, to amend that report by adding the LGBTQIA+ community and those living with HIV to the list of those affected by COVID-19. Those both passed. Someone wanted to delete BIPOC and spell out Black, Indigenous, People of Color; the Assembly declined to take that step.

There was then an attempt to reconsider 00-29 to add that we are concerned with black women and girls. In a close vote, the Assembly declined to take that step by a vote of 212-239.

After a question about whether the GA leadership was using appropriate social distancing and using masks, which we were assured they were, the Assembly adjourned at 9:18 p.m.

Co-moderator Gregory Bentley handed himself well. I’m not sure I’ve ever seen so many votes to call the question as I did in this particular plenary session. Part of that, I’m sure, is due to the fact that this is an online Assembly, and these reports have not been vetted by committees. Part of it is also due to the fact that we’re attempting to address current, ongoing events. The death of George Floyd has been a wakeup call for many white Americans. We want to do the right thing, but we’re not always sure of what to do or what language to use. Although there were some commissioners that got to be annoying because they wanted to speak to almost every issue, all in all, this Assembly did well in addressing some difficult issues. We can be proud to be Presbyterian.

Two corrections to my reports from the first weekend:

1. In my Day 2 report, I reported that Arthur Fullerton was the first openly gay candidate to stand for moderator. Several reminded me that Bertram Johnson who was one of the candidates for co-moderator in 2018 is also gay. I stand corrected.

2. In my Day 1 report, I said that San Francisco Theological Seminary had been sold to the University of the Redlands. This has been described as a “merger,” rather than as a purchase. I did not intend to take sides in this ongoing debate by my use of this language. It is unclear to me what is the most accurate way to describe the relationship between these two institutions.