Getting to Know our Newer Pastors: Rev. William “Evan” Walker

Getting to Know our Newer Pastors: Rev. William “Evan” Walker 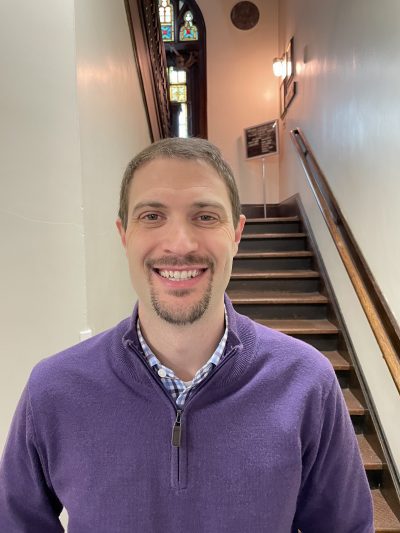 Rev. William “Evan” Walker began his ministry with the First Presbyterian Church of Fairmont in August 2020. His call to the Fairmont church was a bit different in that his wife, Jennifer, had already accepted the position of Associate Professor of Musicology with the West Virginia University School of Music, which started in August 2020, so Rev. Walker was looking for a church in the area.

God moves in mysterious ways in that Rev. Walker was quickly drawn to information about First Fairmont. Rev. Walker says that he was attracted to the church because of their open and affirming stance. He was also very impressed by their outreach to and involvement in the community. The church has a street store and a shoes-for-kids ministry. In short, the church was putting their faith into practice and reaching beyond their walls. Subsequent conversations with the pulpit nominating committee confirmed that God was indeed calling him to this church. It is so wonderful when we can see God’s plan come together like this.

Rev. Walker commented on the differences that Covid-19 has made in his new call. To start, the call process itself was conducted mostly electronically. Plus, it has been a real challenge getting to know the church and the community with such limited in-person visits. He said that there was nothing in seminary about working with the difficult decisions of when they could have in-person worship and when they couldn’t. On the plus side, he noted that he has become much better with PowerPoint and how to reach people with online programs and worship. He also noted that prior to his arrival the church had made a major investment in video, sound, and streaming equipment. This has allowed them to reach people in far off places as well as local members.

When asked about what was different with this church compared to other churches he has served, Rev. Walker pointed to the larger staff and the very active committees/teams. It has been an adjustment to not be involved with everything happening in the church. He has been gratified that he does not have to do everything and that high-quality worship and programs are being done.

The congregation has a lot of positive energy and willingness to engage in ministry and sharing the good news. There are a good number of children and youth in the church, and this allows the church to plan and build for greater ministry in that area. Rev. Walker is excited about what the church is currently doing and the great possibilities the future holds. He wants to see even greater involvement in the community and in outreach.

Rev. Evan Walker is originally from Johnson City, TN. He attended King College in Bristol, TN, obtaining a BA in History. He graduated from Princeton Theological Seminary with a Master of Divinity in May 2009.

While in Roxboro, Evan served on the Youth Council of New Hope Presbytery; from 2018-2019, he served as moderator. He was elected as a commissioner to the 2020 General Assembly and has served on numerous local committees and boards, including the United Way Board of Directors, Person County (NC) Health Assessment Team, Interfaith Outreach Ministry, and BASIC (Brothers and Sisters in Conversation), an organization dedicated to fostering interracial dialogue in Person County. In Kentucky, he served on the Youth Council of Western Kentucky Presbytery. He was on the Board of Directors of the Youth Center of Sturgis, KY, and he spearheaded the establishment of a community garden in Sturgis.

Evan and his wife, Jennifer, married in January 2011. Jennifer completed her Ph. D. in Musicology at the University of North Carolina in 2019 and, as previously noted, is an associate professor at WVU. They are foster parents to a wonderful little boy, and they have a dog, Carson, who brings joy and laughter.