Getting to Know our Newer Pastors: Rev. Kristi Shay Moore

Getting to Know our Newer Pastors: Rev. Kristi Shay Moore 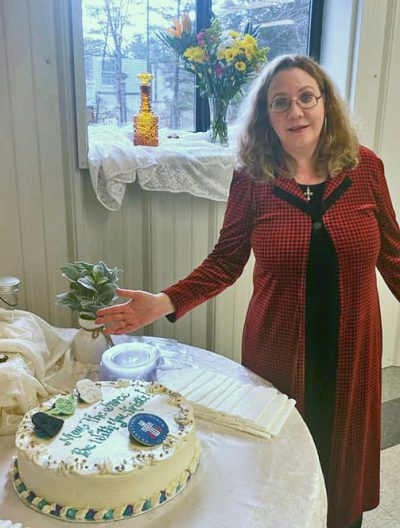 The Rev. Kristi Shay Moore began her ministry with the Edgewood Presbyterian Church in Lewisburg in August 2021. For Kristi, it felt like coming home again “to the arms of my mountain mama, West Virginia.”

Kristi was born in Parkersburg and was raised there, along with her brother, by her grandparents and mother. Her grandparents were lifelong Methodists, and she was officially welcomed through baptism in the United Methodist Church. Kristi was active in the church as she grew up, and she felt loved and included by her church family. They were patient with her many questions about God and the cosmos. “What was God doing before creating the world?” “If there was no world, what WAS there?” “Who wrote the Bible?” They nurtured and encouraged her in her faith.

Kristi went to Marshall University as an undergraduate, and it was there that she was introduced to Presbyterianism. Her religious studies professor was an ordained pastor in the PCUSA, and she also met Bob Bondurant and the PROWL campus ministry group, now called Marshall UKirk. They played a huge role in her spiritual development and ultimate sense of call in ministry. Kristi began preaching through PROWL’s teams to churches in the presbytery and began attending First Presbyterian, Huntington. In time, she became a member there and was taken under care of the congregation and the presbytery while she studied and received her M.Div at Louisville Presbyterian Theological Seminary.

After seminary, Kristi came back to West Virginia. She was ordained at the Westminster church in Vienna, and later took a call at Highlawn in St. Albans. While at Highlawn, she married, but her marriage was not a happy one, and it ended in divorce. But the church did great ministry and was supportive of her in this difficult time.

She was next called to Nashville, and for 12 years, she served the Bellevue church and the Glencliff church. But then it was time to go back to West Virginia. Kristi writes, “It’s been a wild ride here and I’ve loved this city (Nashville), but my heart yearns for home and old friends and family closer by. I look forward to how Jesus will be going up ahead in this new adventure.”

When asked about what had attracted her to the Edgewood church, Kristi said that she was impressed with their love of God, their open and affirming stance, and their commitment to being a safe place. She was drawn by their love of their broader community and their willingness to engage in mission beyond the walls of the church.

Though she is a native of West Virginia, Kristi has had to make some adjustments in coming to a smaller town. Her moves from Parkersburg to St. Albans and then to Nashville were all moves to bigger cities, so there has been an adjustment period.

Kristi says that moving is like a plant being transplanted. It is a bit of a shock to your system until you settle in. However, she loves being closer to family, and she feels very supported and encouraged by the people of Edgewood and the wider community.

When asked about differences between this church and past calls, Kristi talked about the willingness of Edgewood to try new things, to experiment with technology, and to discuss and study difficult topics like racism. In her past churches, she encountered a lot of self-defeating behavior. When some new idea for mission was suggested, people would make excuses: “We don’t have enough people.” “We don’t have enough money.” But she says that Edgewood is like the small dog who is willing to take on a Great Dane. Small dogs don’t seem to realize how small they are. Even though Edgewood is a small church, they are not intimidated by challenges and big dreams. Instead of looking for excuses to not engage, Edgewood is looking for ways they can, with God’s help, do what needs to be done. Kristi finds that attitude very refreshing.

Edgewood has been serving meals on a drive-through basis to the wider community. Since they began in December 2020, they have served nearly 2,800 meals. This has not gone unnoticed by their neighbors. They have received generous donations from the community, and some of the neighbors have begun helping with the meals and attending services. Kristi says there is tremendous energy around this mission. She also notes that Edgewood has made the commitment to be a Matthew 25 church and is creatively looking for news ways that God is leading them to be engaged.

When asked about her dreams for ministry with Edgewood, Kristi wants to encourage them in their love and outreach. She sees Edgewood as having the heart to reach people who have been hurt by the church in the past. Edgewood is a caring, safe community that values people and wants to show them God’s love. Kristi also dreams of finding ways for Edgewood to join with other churches in the community to do more effective ministry and outreach.

May God bless Edgewood and the Rev. Kristi Shay Moore in their ministry together!