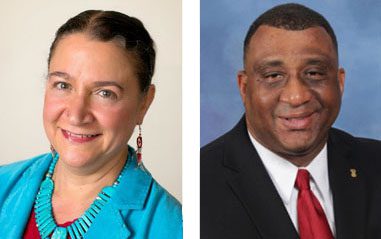 After their opening statement, each team had the chance to respond to four questions – three coming from commissioners and one posed by one of the Missionary Advisory Delegates. My notes indicate that the questions were: What are the three things you would choose to advocate to change?, How do we make everyone feel included in the church?, Can you share your vision for providing human and financial resources to our congregations?, and What is the role of the Presbyterian Church in dealing with racism/how do our churches address white supremacy?

They all provided what I would call competent answers, although none really stood out. Occasionally, one of them would get cut off by the time limits that were imposed to keep things moving, but I didn’t feel that really worked against them.

I’m not sure what gave Bentley and Street-Stewart the edge. Arthur Fullerton was the first openly gay candidate running for moderator, although his responses never really addressed specifically any LGBTQ concerns. If anything, I thought Fullerton and Mainard O’Connell did the best in their opening remarks and responding to questions, and I probably would have bet on them to be elected. Neither the advisory delegates nor the commissioners saw it that way. I guess it’s a good thing I don’t bet.

So we will have an African American man and a Native American woman representing our denomination for the next two years, and I think that will be a good thing. We can learn a lot from them. Please keep them in your prayers. They have a lot of work ahead in this next week to get ready to moderate the plenary sessions coming up on Friday and Saturday.

Although the election of the co-moderators was the only thing scheduled for Saturday night, there was one piece of business that got snuck in. Although they did not debate or vote on it (those actions being postponed until Friday), there was a motion to reconsider the approval of Item 01-04, which includes what items to refer to the 2022 General Assembly. If passed, this opens the door for this Assembly to deal with additional items, which creates the potential for extending the proposed docket, maybe by a lot.

On Tuesday at 3 p.m., commissioners and observers have the opportunity to take part in the Youth Rising Coalition, which is part of the General Assembly’s Hands and Feet Initiative. This will be the second time we have tried this. Through the Hands and Feet Initiative, the GA has sought to get commissioners involved in the local community where they are meeting. In St. Louis, that was a march to end cash bail, which forces people to be unjustly incarcerated because of the way the bail system is set up. In Baltimore, we have the chance to support young entrepreneurs who will get to tell their stories and share their dreams at this event.

At 7 and 10 p.m. Wednesday, commissioners and observers have the chance to take part in a Bible Study led by James and Mary Taneti. He currently serves as director of the Syngman Rhee Global Mission Center for Christian Education and assistant professor of World Christianity at Union Presbyterian Seminary; she currently serves as Children and Christian Education Ministries Coordinator at Goldsboro (NC) First Presbyterian Church. I signed up to be one of the small group leaders for this, so we’ll see how that goes.

One last note: when they were congratulating the co-moderators on their election, Rev. Bentley said he was “happy as a hippopotamus.” I had never heard that phrase before, but I like it.