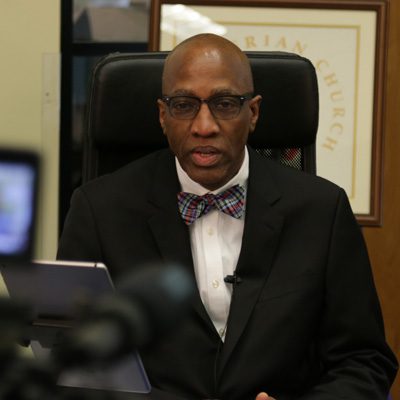 J. Herbert Nelson was elected to another four-year term as Stated Clerk (photo by Randy Hobson).

By a vote of 454-0, J. Herbert Nelson was elected to another four-year term as Stated Clerk. His wife, the Rev. Gail Porter Nelson, offered an impressive prayer of installation for her husband. Of interest was that in addition to his wife, his daughter and his mother-in-law were with him. He described her as his “mother-in-love,” which I thought was a nice way of putting it.

Next up was Item 00-05, On Amending the Children, Youth, and Vulnerable Adult Protection Policy and its Procedures. There were several minor amendments. One specified that the two adult rule applied to online meetings as well as in-person gatherings. Others changed language in the rationale that referred to crippled or being crippled. Language matters. The amended item was approved by a vote of 455-1.

Although there were two additional items scheduled for this plenary, since it already past 1 p.m., it was decided to postpone those items to the next plenary and to reconvene 15 minutes earlier than scheduled.

Plenary 5 opened with co-moderator Elona Street-Stewart still presiding. There was a memorial minute for former moderator Joan Salmon Campbell who had passed away since the last assembly and who was apparently inadvertently overlooked when other deceased moderators were recognized Friday.

Item 00-07 was the first item of business in the afternoon session. It dealt with the Revision of the Bylaws of the Presbyterian Church A Corporation. This probably seems pretty dry, and it was. There was one amendment to increase the number of members of the board from 14 to 18, which was defeated. Another was based upon the advice of the Advisory Committee on the Constitution to specify the time period whenever they delegate their authority to other groups, which was passed.

Item 00-21 was next. This was the approval of the report of the General Assembly Nominating Committee. Since there were no additional nominations, the report was approved by common consent.

At this point, there was a shift in co-moderators, with Gregory Bentley taking over. He began with a statement on the kerfuffle over the status of San Francisco Theological Seminary. Since they do not feel the issue can be adequately addressed at this Assembly, the co-moderators have committed themselves to bringing the two parties together to address this dispute, and they will bring in a mediator if necessary. While an appropriate and helpful step, this did not end the ongoing tension.

Item 00-11 was the Confirmation of the President of McCormick Theological Seminary, which was approved 461-2. We then heard from David Crawford, the new president.

Item 00-09 was the approval of New Trustees Elected by Presbyterian Church (U.S.A.) Theological Seminaries, who were confirmed 458-7.

Item 00-10 was to allow the celebration of the Lord’s Supper at our Theological Seminaries. There was an attempt to add San Francisco Theological Seminary to the list since they were not on there because at this time they are not being considered as one of our theological institutions. This amendment should have been ruled out of order immediately. There were some hard feelings when it wasn’t. After some questions for clarification, the item was finally approved 440-28.

Item 00-02 was the approval of the list of related schools, colleges, and universities (including our own Davis & Elkins College). This was approved 464-9.

Item 00-06, On Amending Standing Rule B.3a Regarding Corresponding Members, was to clarify who receives this recognition. It was amended to allow synods that do not have executives to send their stated clerks. There was minimal discussion, and it was approved 461-7.

Item 00-09 was the Report and Recommendation from the Administrative Commission Formed by the 223rd General Assembly (2018) to Address Disorder in the Synod of the Covenant. Basically, they want to extend their work for additional two years. Although there were questions raised about the cost, the vote was 433-37, which more than met the 2/3 vote that was required to authorize this.

Item 00-20 was On Extending Special Committees, Teams, and Task Forces. This applies to 12 specific groups whose reports would have come to this GA but who would now report to the 2022 GA. It specifies that should these groups meet, they would utilize online tools and would not have in-person meetings. There was an attempted amendment that further specified that there would not be any cost to the General Assembly. That was defeated in a close vote of 225-242. There was another amendment that asked to remove the 2020 Vision Team from this list, which seemed somewhat shortsighted. That was defeated 66-403. The final report was approved 451-13, more than meeting the required 2/3 vote.

With that, the Assembly recessed for about a half hour – until 4:30 p.m. They started off to consider any New Business; however, none was proposed.

The Assembly then heard budget presentations from the Presbyterian Church A Corp and Administrative Services Group, from the Presbyterian Mission Agency, and from the Office of the General Assembly. Each of them focuses on a different aspect of the church’s work. A Corp and the Administrative Services Group holds title to property and provides business services such as utilities, insurance, and translation services for all denominational agencies. The Presbyterian Mission Agency oversees the work of our mission co-workers and is involved in compassion, peace, and justice work, evangelism, racial equity, and women’s work, theology, formation, and evangelism, as well as curriculum. The Office of the General Assembly obviously organizes the biennial General Assembly meeting but also includes the Presbyterian Historical Society as well as Church Leadership Connection, which helps connect churches seeking pastors and pastors seeking new calls. They also provide advice and support to our presbyteries and synods. While it was exciting to hear about the work that each of them was doing, it was discouraging to hear the talk about anticipated shortfalls in income.

Before the Assembly dealt with the budget directly, they addressed Item 00-27, On the John C. Lord and Edmund P. Dwight Funds. These are bequests given to the PCUSA, and for some reason, the Assembly has to approve the use of the income realized from these funds – which is about $200,000 annually – each time they meet. One commissioner pointed out that our denomination has benefited from the wealth of slaveholders and that we are ignoring the plight of black women and girls. Although a truthful observation, it didn’t seem to have much to do with the issue before us. Eventually, this item was approved 421-38.

The 2021 and 2022 budgets came to the Assembly through Item 00-24, which was a Joint Report from the Committee on the Office of the General Assembly, Presbyterian Church (U.S.A.), A Corporation Board, and the Presbyterian Mission Agency Board to the 224th General Assembly (2020). I felt presenting a unified budget was a very positive sign and represents definite progress.

Commissioners raised a number of questions. One wanted to know how the church would deal with the anticipated unknown financial shortfall. The answer is that while the budgets as presented are balanced, they contain a line item for unanticipated reductions, which means that they know there are going to be cuts made but the decisions as to exactly what to cut and by how much will be made later and will be based on how much money actually comes in.

There was then a technical issue that held things up for maybe just 2-3 minutes. Considering all that we had to do online, that’s pretty amazing.

Another wanted to have any budget cuts to not be reflected in layoffs. Staff indicated this would be the last option. Commissioners seemed to feel it would be too restrictive to spell this out and turned down the amendment 85-382.

Another wanted to change the language, so rather than saying that they could amend the budget, they suggested language that “would spend amounts in excess of, or less than, amounts budgeted for a specific line item as a result of emerging situations” and then report the variance to the 2022 GA. That was approved 327-133.

After all that, the amended budget was approved 421-21.

The idea that there would be no new business proved short-lived after commissioners complained that they had tried to submit new business but were not able to do so. The moderator was gracious enough to allow them to try again. For each item to be considered, the Assembly had to suspend the rules, which required a two-thirds vote of those enrolled.

The first new business asked the Assembly to recognize the abuse suffered by black women and girls. That effort failed. Even though it received 306 votes, it needed 326 in order to suspend the rules. A commissioner then requested that the Assembly offer some sort of recognition of this concern. There was a moment of silence, followed by a moving prayer offered by the Stated Clerk.

There was then an attempt to have the Office of the General Assembly appoint a task force to study how the PCUSA might protect the rights of the preborn. That was rejected by a vote of 104-250.

The Assembly then paused for 8 minutes and 46 seconds to remember all the injustice, indignities, and oppression suffered by Black, Indigenous, and People of Color due to white racism. That experience may have been the most moving part of the Assembly for me. I could not imagine someone kneeling on my neck for that long.

There were then some announcements by the Stated Clerk and a video expression of appreciation of the co-moderators by the Young Adult Advisory Delegates. Julia Henderson, Interim Director of Assembly Operations, thanked a number of people who made this online Assembly possible. The Stated Clerk, J. Herbert Nelson, then thanked the Committee on Local Arrangements of the Presbytery of Baltimore and Vicente Guna, Manager of Technology in the Office of the General Assembly and highlighted that he will become an American citizen on July 8.

A closing worship service featuring some wonderful music by Camille Metoyer Moten officially brought the 224th General Assembly to a close just before 8 p.m. Things took longer than planned, but that’s really not unexpected. All in all, I would consider it a good Assembly, probably better than I thought and probably much better than I feared. I’ll write up my closing thoughts after I have some time to reflect on it all.