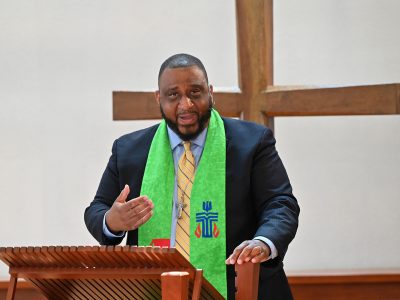 The 225th General Assembly began with worship on Saturday, June 18. Co-Moderator Gregory Bentley’s sermon on Micah 6 was “From Religiosity to Righteousness.” If I can find a link to that sermon somewhere, I will share it because it was well worth listening to – or, in my case, listening to again. One good quote: “God is not looking for more people in church. God is looking for more church in people.” He also shared a fact that I had not heard before: when they were dragging the river for Emmett Till’s body, 7 other Black bodies were found.

The offering for the opening worship service went to Restorative Actions, an organization started by our co-moderators. Here’s how they describe themselves: “Restorative Actions is an economic equity initiative (that) allows U.S. Americans who benefit from institutional racism, to provide credible witness for justice by surrendering ill-gotten gains toward the establishment of just relationships with our Afro-American & Indigenous communities.” The more I learn about this initiative, the more I am intrigued, and the more I become convinced that this may be a good way – and maybe the best way that I have heard about – for us to dismantle the wealth gap between races. I encourage you to look into their website, restorativeactions.org.

Plenary 1 started after lunch break and featured an important vote to change the Standing Rules so that the General Assembly can meet in a hybrid format. They had adopted emergency rules to allow that to happen at the 2020 General Assembly, but even that meant that all actions adopted at that meeting had to be approved at this one. Assembly committees are meeting in staggered shifts, but there were enough commissioners physically present in Louisville – 57 Ruling Elder commissioners and 56 Teaching Elder commissioners – to establish a quorum. They barely made it as quorum was set at 50 Ruling Elder commissioners and 50 Teaching Elder commissioners from at least 4 synods. (All 16 synods were represented.) They voted 113-0 to allow the GA to meet in hybrid format for this meeting only. They will also consider whether this will be allowed for future meetings, but doing so will apparently require a change in the Book of Order, which will mean that it will have to be approved by a majority of presbyteries. Stay tuned.

Co-Moderators Elona Street-Stewart and Gregory Bentley then reported on their work over the past two years. They have been doing a podcast (which I reluctantly say that I had somehow missed) in which they have attempted to “tackle big issues and try to facilitate a shift in consciousness, helping the church to see things differently.” I think this is another good resource, and I think it will be worth watching/listening to. You can find links on PC-Biz or Vimeo.

There was then a second vote “On Approving Special Rules of Order Regarding Quorum for the 225th General Assembly,” which were the same rules adopted for the 224th GA in 2020. This vote included all commissioners in person and online and was approved 346-0.

Plenary 2 took place after a break. It featured a Necrology Report with the names of Teaching Elders who had died over the past two years scrolling on the screen. There were a lot of them. I noticed some names with West Virginia connections: Dick Krajeski, Roland Perdue, and Georgiana Williams, as well as the name of one of the ministers who officiated at my wedding back in 1979.

The Presbyterian Historical Society then showed two videos about former General Assembly Moderators who had died since the last GA. One was Jules Spach, moderator of the PCUS GA in 1976 and the other was Doug Oldenburg, moderator of the 2010 GA and former pastor at Davis Memorial Presbyterian Church in Elkins.

There was then an orientation to the Office of the General Assembly, followed by the Stated Clerk’s Report. Here are some quotes: “If Jesus can be raised from the dead, so can our churches.” “We’ve got to figure out ways to innovate and to go into places where we are called.” “We need to stop looking at ourselves and start looking to the Lord.” “That’s the vision – to do what the Bible says – to live in hope – to be more faithful to the ways of Jesus Christ – to walk without complaining.” (There were more “That’s the vision” quotes, but these were the ones I had time to write down.)

There was then an orientation to the work of the Administrative Services Group, followed by a Budget Presentation. While I enjoy numbers, let’s just say the Budget Presentation almost made my eyes glaze over. Some numbers that got my attention: the PCUSA has 418 full-time and 43 part-time employees. We have 75 Mission Co-Workers in 80 countries, and there are 694 New Worshipping Communities, of which 245 are composed of communities of color.

Plenary 3 started after a dinner break with an orientation to the Presbyterian Investment and Loan Program, followed by a commissioning of Young Adult Volunteers and Mission Co-Workers. 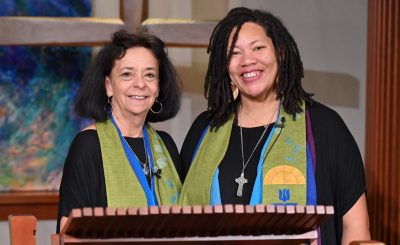 The Assembly turned to the election of Co-Moderators. There were two teams standing for office: one was the Rev. Ruth Santana-Grace, executive from the Presbytery of Philadelphia, and the Rev. Shavon Starling-Louis, pastor of Memorial Presbyterian Church in Charlotte Presbytery; the other was Commissioned Ruling Elder Josefina Ahumada from the Presbytery de Cristo (New Mexico), and the Rev. Marilyn McKelvey Tucker-Marek, a minister with Flint River Presbytery (Georgia). Each team made an opening presentation that was followed by questions from the commissioners.

Sometimes, there’s a telling moment that gives a sense of who’s going to be elected. This time nothing jumped out at me. I’ve known Ruth Santana-Grace doing mid-council work and got to know her better at a week-long coaching training event we did in December 2019, so I admit I would have voted for her. Commissioners obviously didn’t have that advantage, but by a vote of 203-151, the 225th General Assembly elected Ruth Santana-Grace and Shavon Starling-Louis as their co-moderators. Their service of installation included prayers by Shavon’s daughter and Ruth’s son, which was a nice touch. Among the gifts they received on their election were custom-made Louisville Slugger bats.

On Sunday, our Stated Clerk, the Rev. J. Herbert Nelson, preached at a Juneteenth Worship Service for both the General Assembly and the City of Louisville. If I find a link to a recording of that, I will send it along, too.

From June 20-22, the Assembly Committees on Mid-Councils; Theology, Education, and Worship; Polity; and Rules of Discipline are meeting. You can live-stream each committee at the 225th General Assembly website. While I’m interested in their work, I also have to admit I’m not that interested to follow them gavel-to-gavel or even to pop in every so often to see what they are up to. If we were meeting in person and visitors/onlookers/GA junkies were allowed to attend, I would be doing that. It’s a lot easier to be at home and simply click on that link, but so far I haven’t been able to do that. Maybe tomorrow – but probably not. There is a daily update on the work of the General Assembly at 10 a.m. EDT on the Spirit of GA Facebook page. I will try to remember to watch that.

Once plenary sessions of the General Assembly resume on Tuesday, July 5, I intend to offer my daily reports and reflections. If anything is stunning, startling, or just catches my attention during committee work, I’ll pass that on, too.