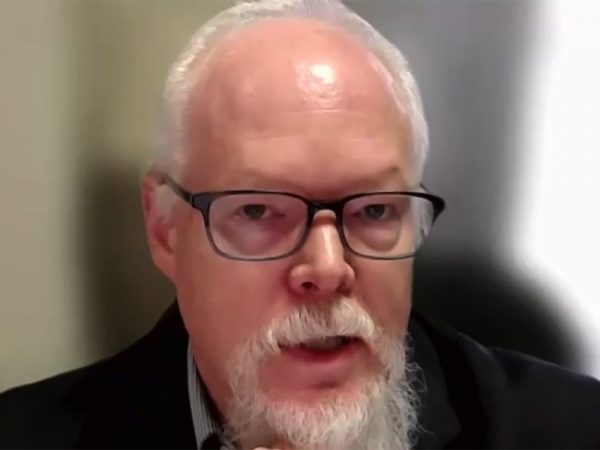 The Rev. Forrest Claassen, moderator of the Advisory Committee on the Constitution, advises the assembly on amendments to the proposed Rules of Discipline during Plenary 11 on July 7, 2022.

Worship was the first thing on the docket for the 225th General Assembly on Thursday, July 7. This was the Ecumenical Worship Service and featured the Rev. Dr. Karen Georgia A. Thompson, the Co-Executive for Global Ministries of the United Church of Christ, preaching on Revelation 21:1-6. I missed all but the closing hymn because I was with the presbytery’s Stewardship Committee that was working on the 2023 presbytery budget, but I plan or perhaps hope to watch the service later. You can find it on the homepage of the 225th General Assembly under the worship tab or on the Spirit of GA Facebook page.

Bills and Overtures gently reminded commissioners that they were behind the docket. Nevertheless, there was a motion to extend debate time back to 2 minutes. Wisely, this was rejected by a vote of 180-192.

First up this afternoon in Plenary 10 was the report of the Committee on Ecumenical and Interfaith Engagement. They had 7 items, and all were approved by a vote of more than 92% in committee. They reported on the churches that will receive invitations to send Ecumenical Advisory Delegates to the 2024 General Assembly, as well as highlighted that there was a report and recommendations from the Third Round of Bilateral Dialogue between the Episcopal Church and the PC(USA). They also reported on ECU-06,which presented a Study Document on Denouncing Antisemitism and Islamophobia. Congregations and councils are invited to participate in a time of study and reflection using this document. It points out that any criticism of the state of Israel is not necessarily anti-Semitic. The Assembly voted 367-9 to approve the distribution of this study.

The final item of business from this committee was ECU-02, Recommendation to Direct GACEIR (General Assembly Committee on Ecumenical and Interfaith Relations), in Partnership with the Office of the General Assembly and the Presbyterian Mission Agency, to Explore a Global Covenant Agreement (GCA) to Use as a Formula for Establishing Unique Relationships with Other Denominations. Not the most earthshaking development but still important.

The Rules of Discipline Committee was up next. ROD-06 was the first item to be considered. It proposes Amending G-1.0503, G-1.050, and G-3.0105, which deals with business proper to congregational meetings as well as permitting electronic meetings for congregations and their committees as well as councils and their commissions and committees. There was no debate, and the motion was approved by a vote of 378-1. (What was that one person thinking?)

Next was ROD-05, On Amending D-3.0106 Regarding Renunciation of Jurisdiction. It begins by stating that “the judicial process does not end when a person in an ordered ministry or a member renounces the jurisdiction of the church.” The committee approved this by a vote of 14-9, so there are obviously different ways of looking at it. The Advisory Committee on the Constitution recommended disapproval, stating that “Once…consent has been removed by renunciation of jurisdiction, the councils of the church cannot compel an individual to participate in judicial proceedings or to accept any censure imposed.” After minimal debate, the motion was approved by a vote of 333-50.

ROD-07, Survivors of Sexual Misconduct Task Force Recommendation, was considered next. The committee recommended disapproval because they thought the report went too far. There was a substitute motion proposed that sought to reflect the intent of the original report but modified some of their wording. This mostly seemed to involve questions regarding confidentiality. The Advisory Committee on the Constitution advises disapproval of ROD-07. There was lots of debate. And several amendments.

(In the midst of this, it was suggested that the lunch break be shortened to 30 minutes. It was explained that this was not possible because translation services would not be available if the time was changed.)

While this is an important issue, the Assembly really got bogged down on this motion. (I have to wonder: is it ever appropriate to pray for a motion to call the question and end debate?)

The Assembly had to vote to take a lunch break, and I was able to breathe a sigh of relief. Despite a lot of parliamentary wrangling, I was never actually called on as a parliamentarian while I was on duty. For that, I am very grateful.

After lunch, the Advisory Committee on the Constitution weighed in with some suggested language:

In the exercise of pastoral care, ministers of the Word and Sacrament and ruling elders who have been commissioned by a presbytery to limited pastoral service (G-2.10) work to create communities of trust, accountability, and confidentiality while protecting the vulnerable. Confidentiality creates safe and sacred space for individuals to share concerns, questions, and/or burdens [and seek spiritual guidance.] [Confidentiality should not be an excuse to hold secret the knowledge or risk of harm especially when related to the physical abuse, neglect, sexual abuse of a minor or an adult who lacks mental capacity.] [Ministers of the Word and Sacrament and commissioned ruling elders shall] hold in confidence all information revealed to them in the course of providing care and all information relating to the exercise of such care except:

[When a] minister of the Word and Sacrament or a commissioned ruling elder reasonably believes that there is risk of imminent bodily harm to any person.

ROD-04, On Amending D-10.0303 and D-10.0302 Regarding Accused’s Rights to Be Notified, was considered next. It would require, among other things, that those accused are to be notified in writing if no charges are filed against them. Interestingly, if ROD-03, which is the revision to the Rules of Division, is passed, this action would be moot. It was approved anyway by a vote of 326-19.

ROD-03, On Replacing the Current Rules of Discipline Section with a New Church Discipline Section, was then considered. The title of the overture says what it intends to do – replace the current Rules of Discipline with a major revision – the first one since 1996. Although that may not sound like that long ago, it was more than 25 years. An important symbolic difference is changing the title of this section from the Rules of Discipline to the Rules for Discipline. While the revision retains much of the previous language, it intends to make it easier to use and understand. The Assembly then proceeded to review the new, proposed language chapter by chapter. We didn’t get very far before there was a proposed amendment to chapter 1 PRINCIPLES OF CHURCH DISCIPLINE, adding language “To pursue and reveal the truth” as one of the purposes of the Rules for Discipline. This was approved by a vote of 357-12. Chapter 2 JUDICIAL PROCESS DEFINED escaped unscathed. There were two changes proposed for chapter 3 PERMANENT JUDICIAL COMMISSIONS, one substantive, one editorial. Chapter 4 REMEDIATION went unchanged. There were several editorial changes recommended for Chapter 5 TRIAL IN A REMEDIAL CASE. Chapter 6 REMEDIAL APPEALS was accepted as is. Chapter 7 DISCIPLINARY PROCESS had several proposed amendments. The first was “For instances of alleged sexual abuse of another person, if [If] an accused has died or is no longer under the jurisdiction of the Presbyterian Church (U.S.A.), the investigating or prosecuting committee shall ask the accuser, and if reasonably possible, those alleged to have been harmed, if they request the council to continue a pastoral inquiry under the provision in G-3.0109b(6) [or to undertake a separate pastoral inquiry for other offense(s)]. If they choose to make that request, [or if the investigating or prosecuting committee deems it necessary,] the investigating or prosecuting committee shall communicate it to the clerk of session or stated clerk, who shall bring the matter before the council for consideration. [Any information collected in the course of such a pastoral inquiry shall be retained by the council and shall be made available as evidence if at some point the circumstances related to D-7.1501c apply.]” This was approved by a vote 371-8.

A question arose as to whether the Rules for Discipline apply to participants to New Worshiping Communities. There was a proposed amendment to Motion to Amend D-7.0102 to make that happen. It was approved 329-41. There was an additional amendment to Amend D-7.0201e so that accusations would have to come from any verifiable source. The ACC said this is the task of the investigating commission to verify if the source is reliable. The Assembly rejected this by a vote of 29-366. Andy Rice then made a motion to amend this so that accusations would come from a credible source. The ACC advised that this was also the job of the Investigating Committee to make the decision as to whether any source making an accusation is credible. The amendment failed 45-322.

Before we moved on from Chapter 7, the Advisory Committee on the Constitution then pointed out that by subjecting participants in New Worshiping Communities to our discipline, we are subjecting people to our discipline who have never agreed to be under our discipline. This gave commissioners pause. Eventually, someone moved that the Assembly reconsider their previous action. That prevailed by a vote of 310-60.

The Bills and Overtures Committee then stepped in to recommend that the remainder of this report be suspended until Plenary 12, which is tomorrow. (This was necessary because there was a hard stop scheduled for 5 PM. Among other things, it meant that there would be no translation services available. ) This was adopted by a vote of 370-12. The Bills and Overtures Committee also made a recommendation to move worship to 10 AM EDT and plenary to start at 11 AM, with the lunch break being pushed back to 2:30 PM, which may mean that it will be limited to 30 minutes. (Yikes!) This would give the Assembly another hour and a half to do its work. The proposal was adopted by a vote of 321-6. (Note: I’m doing my best to record these votes as accurately as I can, but I may have misheard/misread some of the numbers, and for that I apologize. I’m not trying to intentionally mislead you.)

The Assembly heard another motion to reconsider an item previously passed. (Another apology – I missed what that was for.) Although there was no vote, the motion needed to be made today so that it could be reconsidered at a later point in the proceedings. It was parliamentary procedure at work. With that, the Assembly adjourned at 5:10 PM.

At 6 PM, there was a Hands and Feet Initiative, which was a panel discussion of the cash bail system. Cash bail was the topic of the Hands and Feet Initiative at the 2018 General Assembly in St. Louis. It’s hard to believe how that works to push poor people into jail. I meant to watch this but just pooped out. Hopefully, it was recorded for later viewing.

The Assembly did good work, but it was slow work. This may be the slowest GA that I have ever seen. I suspect that part of that is due to the fact that they’re meeting on Zoom. Regardless of the reason, I suspect that we will be up late on Friday and perhaps on Saturday as well.