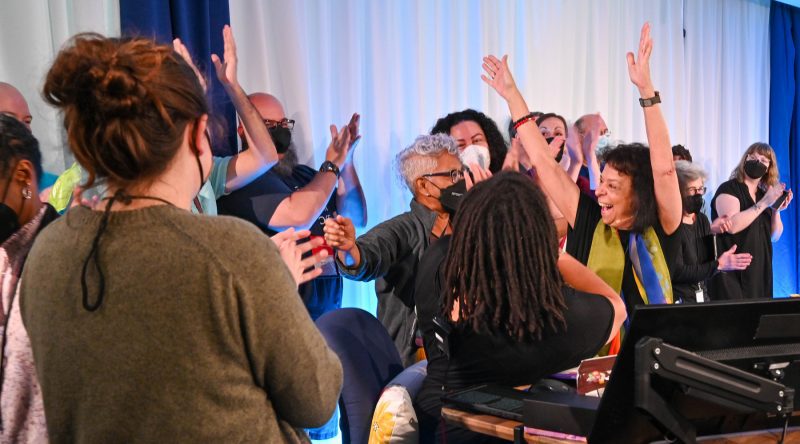 The Co-Moderators and the production team celebrate after the 16th and final plenary of the 225th General Assembly of the Presbyterian Church (U.S.A.) on July 9, 2022, at the Presbyterian Center in Louisville, Kentucky. (Photo by Rich Copley)

The final day of the 225th General Assembly on Saturday, July 9, 2022 began with worship. The preacher was the Rev. Jenny Saperstein, pastor of Northside Presbyterian Church in Ann Arbor, Michigan. She offered a fresh take on Luke 15:11-32 and Genesis 4:8-16. The service can be found on the worship page of the GA 225 website. It is well worth watching.

Co-moderator Ruth Santana-Grace apologized for missing a substitute motion yesterday. Apparently, it was in the cue, but somehow she and Shavon had missed it. (Good for her for admitting her mistake.)

The Assembly then moved to reconsider several items that had been approved yesterday. First, there was a motion to reconsider ROD-03, which was approved by a vote of 262-82. There was an amendment proposed to change “constructive criticism of offenders” to “correction and restraint of offenders” in D-7.0101 and D-1.0201. A member of the committee that revised the Rules for Discipline says the “constructive criticism” language has been in the constitution since the time of reunion. The Advisory Committee on the Constitution has some concerns about the language since we don’t have the power to “restrain” anyone unless we invent Presby Jail (an interesting concept). (Note: commissioners speaking from their cars is still annoying.) There was then an amendment to the amendment that changed restraint of offenders to restraint of wrongdoing. (This was in line with the advice of the Advisory Committee on the Constitution.) Our own Ruling Elder Commissioner Barbara Smith spoke against the amendment, feeling that this process of changing language would be better done by a committee that has more time to think this through. (Good for her.) The Assembly approved the amendment of the amendment by a vote of 297-48. After another amendment was ruled out of order, there was a motion to call the question, which passed by a vote of 333-15. The motion as amended then passed by a vote of 247-113.

There was then an additional amendment to ROD-03 applying to D-8.0701, adding a sentence Parties have a responsibility to disclose relevant, non-privileged record evidence within their possession, custody, and control upon request, and any failure to disclose such evidence may be shared with the Permanent Judicial Commission at any time, including at trial. The Advisory Committee on the Constitution had several objections to that, among them that pre-trial discovery has not been a part of our process, that a defendant still has the right to remain silent, and that if we wanted to make this mandatory, the Book of Order does that by using the word “shall.” The motion to amend failed by a vote of 129-242. Since there were no further amendments, the Assembly moved to approve the Rules for Discipline as amended, which they did by a vote of 326-54.

There was then a motion to reconsider the vote on HSB-06, which deals with Family Leave Policy. This was a way of allowing people who had attempted to make further amendments while it was originally being considered but technical difficulties prevented them from doing so. The intent was to change the 12 weeks of family leave to 6 weeks. There was a problem with the livestream at that point. Apparently that failed.

There was then a motion to Reconsider the Final Action and the Amendment to Item GA-MC-15, which deals with the format of the 2024 General Assembly. There was a complaint by the YAADs that the Assembly did not hear their voice and/or wasn’t paying attention to their advice. Apparently, there was a letter signed by 15 YAADs that had been distributed, expressing their concerns. There was a motion to end debate, which was approved 334-40. The vote to reconsider failed by a vote of 155-226.

The Assembly then turned to the report of the Moving Forward/Vision 2020 Committee. They highlighted MOV-01, Approval of Guiding Statement, which was approved on the consent agenda. It’s about a page and a half long and can be found on PC-Biz. (Although it seems gimmicky, it’s actually good.) There’s also a song, which you can find here. (I’m not sure you can dance to it, but it has great words and might make a good choir anthem.)

There was only one item for action from this committee: MOV-02, Moving Forward Implementation Special Committee Report to the 225th General Assembly with Recommendations and Rationale. Recommendation 1 was the only one not on the consent agenda. That was Move the Mission Engagement and Support Department from the Presbyterian Mission Agency to the Administrative Services Group (ASG) within the Presbyterian Church (U.S.A.), A Corporation (A Corp). It was felt that moving this department would benefit the work of the Office of the General Assembly. There was then a motion to refer to the commission that was approved by the Assembly last night. That was defeated by a vote of 149-213. The motion to make this move was then approved by a vote of 289-103. (I think those were the numbers.)

After lunch, the Assembly resumed with the report of the Committee on Financial Resources. They started with a presentation on the unified budget. They then presented FIN-13, Approval of the Per Capita Apportionment Rate. They are recommending that the Assembly adopt the following per capita apportionment rate of $9.85 for 2023 and $9.80 for 2024, up from $8.98 in 2022. This was approved by a vote of 342-9. They then presented FIN-14, Approval of the 2023-2024 Budget – the proposed 2023 unified budget is $88,365,740, and in 2024, it will be $89,557,635. Those are balanced budgets, but they do draw on funds generated in prior years (which I think is a fancy way of talking about reserves or endowment funds.) It was reported that OGA reserves will likely be depleted by the end of 2024. The Assembly then approved the 2023 and 2024 budgets by a vote of 355-4. They then recommended that the action on FIN-12, Approval of the Per Capita Budget, be answered by the action just taken on FIN-14. A question was asked about why we needed to use reserves when we just raised per capita. Apparently, it would take raising per capita to about $12 in 2023 and $13 in 2024 to do that. The Assembly voted to approve this by a vote of 356-4. That marked the end of business before the Assembly.

After a 15-minute break, the Assembly resumed with: thanks to the Covid Advisory Team, a presentation from the YAADs to the co-moderators and a donation to the Bail Project in appreciation of the Hands and Feet Initiative, thanks to the staff of the Office of General Assembly, Administrative Services Group, Presbyterian Mission Agencies, volunteers who served as parliamentarians, committee assistance, members of the Presbytery of Mid-Kentucky for their hospitality, the production crew, and the GA 225 Planning Team, as well as the commissioners and advisory delegates and to the co-moderators. There was a sense of celebration that they had been able to pull this off. Then, with a final prayer, the 225th General Assembly adjourned at 4:39 PM.

It has been a whirlwind. With all the nagging that the Assembly was behind schedule starting sometime on Wednesday I think, they still finished early, eliminating the last plenary, scheduled to start at 5:30 PM. In some ways, this was a monumental, historic Assembly. But in other ways, they got bogged down in trivial matters too often. Perhaps that’s just human nature. I will offer some final reflections on this Assembly after at least a good night’s sleep. Actually, I may save them for my article in this week’s presbytery newsletter.