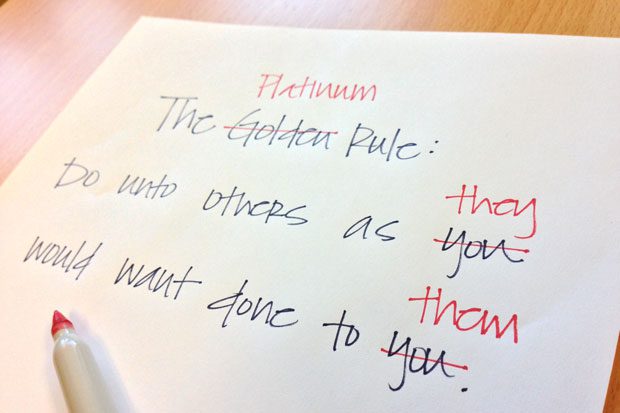 I had never heard of the Platinum Rule before. The Golden Rule, I grew up with that. Probably had to memorize it when I was in Sunday school. “Do unto others as you would have them do unto you.” The teacher may have used that as a way of crowd control to keep a bunch of restless, if not rowdy, second and third graders under control. I vaguely remember it being used in public school for the same reason.

In college, I learned that every major world religion had some variation of the Golden Rule as a part of its teachings. It still makes sense. You should treat others with respect, with patience, with kindness – i.e. the way you want to be treated.

The Platinum Rule, however, says, “Treat others the way they want to be treated.” A quick Google search seems to indicate that it comes from a book with that title written by Tony Alessandra and Michael J. O’Connor published back in 1998. It feels like I must have had my head stuck in the sand for the past 20+ years. Why had I never heard of this before?

The book seems to come out of a business context – helping managers and supervisors recognize that different people have different styles and different motivations. Recognizing those differences can help reduce conflict and employee turnover, as well as lead to increased production.

It also applies to traveling to different countries and perhaps even to different parts of the same country. I remember being told before traveling to Nicaragua for the first time back in the 1990s that it was not considered proper for men to wear shorts or for women to wear short sleeves. Since we would be working on a Habitat project in a rural area, maybe that was more of a distinction between the rural and urban parts of that country or maybe it was more peculiar to that particular region, I can’t remember.

I was thinking if someone from out of state ordered a hot dog in West Virginia and they got one covered with coleslaw, they might be horrified. Maybe they were expecting chili or sauerkraut or maybe mustard and ketchup or even a sliced pickle. What we have come to expect as the appropriate hot dog topping would not be universally well received.

Maybe we have this down, to a certain respect, when it comes to food. We don’t make assumptions about preferred hot dog toppings. We probably know enough to ask if people have any food allergies. On our good days, we might think to ask if they are vegetarian or vegan. We don’t know until we ask.

In the workshop I attended, the Platinum Rule was brought up to help us recognize how we too often make assumptions – primarily about people of color, but also with gender minorities. People were asked to introduce themselves using their preferred pronouns. I had noticed this happening at conferences for the last several years. It never seemed like that much to me. For some people, though, it makes a big difference. It’s a matter of respect. I can make assumptions – or I can ask how someone prefers to be addressed so that I can treat people the way they want to be treated.

Asking someone who does not have white skin “Where are you from?” may be motivated by curiosity and a desire to know more about them and intended as a sign of respect. However, that question may well be received as a sign of disrespect, an indication that you think that they are a foreigner, an outsider, and that they don’t belong here. The question has been used against them, to threaten and intimidate them.

We don’t know how people want to be treated. We make too many assumptions. I don’t want to do away with the Golden Rule. It can still be useful for crowd control with unruly elementary school students and maybe in some other situations as well. However, I think we can do better, and we need to do better. I can also imagine Jesus smacking his hand to his forehead and saying, “Well, that’s what I meant.” I think Jesus would follow the Platinum Rule. Slowly, I’m learning to do that too.