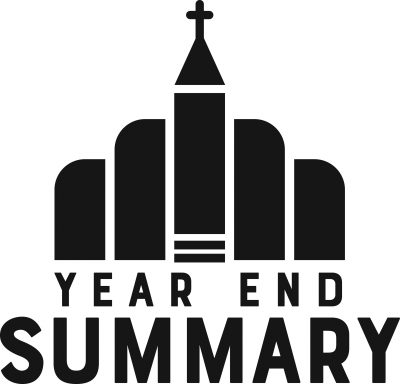 2022 brought lots of changes to this presbytery. We sold our office building, and in many ways, that has to be the highlight of the year. I would include the May Presbytery meeting as part of that process. Not only was it good to be together again, but we also had some significant small group discussion at that meeting. Little did I expect and not even in my wildest dreams did I ever imagine that we would have an offer that was for more than our asking price within a month of that vote.

I have to say that getting everything out of the building was far more work than I ever imagined, too. I still can’t believe that we got rid of over two tons of paper. I don’t want to believe that I have 31 boxes of books under my house still waiting for me to sort through them. Sometimes I think I should have just left them for the new buyer and simply walked away. The reality is that I will want to keep some of them. Which ones survive the cut and what happens to the rest has not yet been revealed.

It was work getting out of the building, but there was some fun along the way. We had a reunion for former presbytery staff that was tremendous. Brad Bradburn, our first executive, and Marie Buffaloe, a former quadrant minister, came down from Pennsylvania. Denise Hall came over from Virginia. Kathryn McCrary and Marcia Myers joined us on Zoom. While we missed those who weren’t able to join us, those of us who were there enjoyed sharing memories of the building and just being together. That almost made up for the drudgery of going through files and deciding what to keep, what to recycle, and what needed to be shredded. It was also fun to greet everyone who came to pick up the “stuff” that they had claimed for their churches. We obviously had accumulated far more than paper over the years that we were in the building.

Another thing that marked this past year was death. We lost Bob Newman. Considering his age and his condition since his car accident, that was not a complete surprise. His funeral was a wonderful celebration of his life, and I was honored to be a part of that service.

The Enslow Park Presbyterian Church provided another set of highlights in 2022. In May, I was able to worship with them the Sunday after they had been flooded. Even though there was still water seeping into the basement, we gathered in the fellowship hall upstairs for worship to celebrate God’s goodness in the midst of all that had been damaged or lost. In September, I was able to worship with them again when they rededicated their sanctuary and all the work that had been done. That was a great celebration, too.

Other highlights of this past year would include…

a) Our November presbytery meeting at Davis & Elkins. The Myles Center for the Arts is a beautiful space to meet.

b) A tour of Bream’s ministry to the homeless. They are doing some great ministry and living out their commitment to Matthew 25.

c) First Presbyterian Church of Charleston’s concert series. Sunday afternoons are prime naptime, but these concerts not only raised funds for some community ministries, they were also fun.

d) Worship with Clear Creek Presbyterian Church. I had never been there before but enjoyed being with them for Sunday School and worship. That visit has inspired me to make worshipping with the remaining churches that I haven’t been to yet one of my goals for 2023.

Depending on how you count, that may or may not be a Top 10 list. A year ago, I probably would not have predicted that any of these things would have happened. Other than the flooding and the deaths, I’m glad they did. It makes me look forward to the year ahead and wonder how God will surprise us in the next 12 months.

It also struck me that even though this was a General Assembly year, General Assembly didn’t make my Top Ten list. This year’s GA did some great work. However, since I couldn’t be there in person, it just seemed like one Zoom meeting after another, which, to be honest, isn’t very memorable.