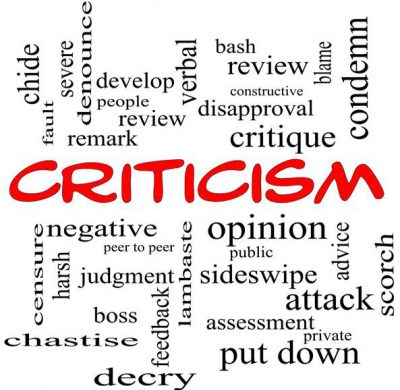 Some people are afraid of snakes. Others are afraid of going to the doctor or the dentist. Probably more of us, though, are afraid of criticism. Some personality types are especially sensitive to this. Sometimes, however, I think it has to do with age.

We can hear the voices running through our brain: Why are you doing this? We tried this before, and it didn’t work. How much money is this going to cost? You know this is going to upset our biggest givers. People aren’t going to like this. (Note: Seldom have I heard people say, “I don’t like that.” It’s almost always, “They won’t like that.” Or “People aren’t going to like that.”) The voices wear us down. So we give up before we even try, just to avoid the arguments and the complaints. Or maybe that’s just me.

I think it’s important to distinguish where the criticism is coming from. Some people are born unhappy. They’ll complain about anything and everything. No matter what you do, they won’t like it. You’ll never make them happy, and it’s not worth the time or the effort to try and make them happy. Other people, though, seldom complain. They’re just generally happy. They’re willing to give you the benefit of the doubt. They get annoyed by the naysayers as much as you do. When those people complain, you need to pay attention.

Even the naysayers, though, should get some credit. At least they’re talking to you. Some people, if they don’t like something, simply disappear without any explanation. Was it something you said or something somebody else said? Was it something you did or maybe something you didn’t do? Is this part of a pattern? Do they switch churches every couple of years? Or are they having some health problems or marital difficulties they don’t want to talk about? Maybe it’s easier for them to stay home rather than facing people who are trying to be caring but who can be perceived as being nosy and intrusive.

What would you do if you weren’t afraid of criticism? What would you try? A different style of preaching, perhaps? Maybe giving up on the Bible study or the Sunday school class that only has two or three people in attendance each week? Yes, they may be faithful but maybe there are better ways to spend your time.

Or maybe you could try a new way of outreach, such as hanging out at the local coffee shop or at the McDonald’s visiting with the other customers, overhearing their conversations, simply being visible in your community. Maybe you could make a point of attending local high school football or basketball games. Some, I’m sure, would rather be attacked by rabid squirrels than spend time that way, but in those events, the sports are really secondary and almost background noise. The primary point is to make connections and visit with people.

To get beyond a fear of criticism, I think we need to be clear about our “why.” Why are we doing this? Is this something we learned in seminary, heard about at a conference or read about in a book? Are we motivated by the fear that if we don’t try something different, the church is going to keep losing members, run out of money or have to close? Is what we’re doing more about us, our faith or our understanding of the faith? Or is this about us trying to show people how smart we are, how hardworking we are, or how much better we are than the people around here?

I think we also need to be willing to admit that sometimes the critics are right and we’re wrong. Maybe they know the people in the community better than we do. Maybe they’ve been burned by a previous pastor’s crazy ideas. Maybe they’re just afraid that you’re using the church as a stepping stone and if your plans work, you’ll get a call to a bigger church that can offer you a bigger salary.

The point is that God was here before we were and God will be here after we leave. God’s at work in our community and in people’s lives even if we can’t see it. It’s always been that way, and it will always be that way. We need to spend the time listening for God and looking for God. I think if I ever serve as the pastor of a church again, I’d begin each session meeting by asking people where they’ve seen God at work in the past week. I think we need to be talking about that and training people to have open eyes and open minds.

Maybe we’ll never get completely beyond our fear of criticism. But if we can be clear about our own motivations, where we see God at work or what may be breaking God’s heart, that will go a long way in giving us the courage to live out our calling regardless of what our critics may say.