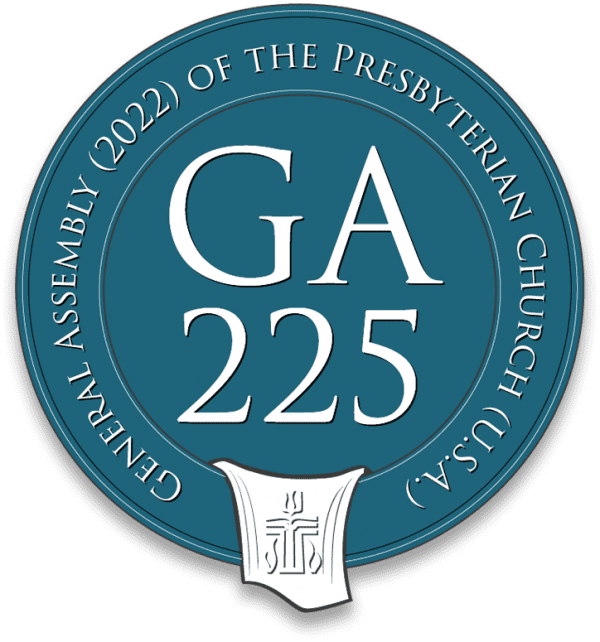 I find it hard to rate General Assembly meetings. For in-person meetings, impressions get colored by the quality of the hotel room, the quality of the food, the friendliness – or perhaps the quality – of my roommate, the number of late night sessions, the number of “frequent fliers” (commissioners who make a nuisance of themselves by speaking repeatedly, often several times a day). The 225th General Assembly (2022) was harder to rate because while committee meetings were held in person, plenaries, for the most part, were held online. Because of this arrangement, I didn’t get to go to and really didn’t need to go to Louisville. Instead, I spent the time sitting mostly in my office, although for a few of the evening session I was at home, watching the livestream on the computer. Sometimes that meant I was sitting staring at a screen for more than 10 hours a day. That’s a lot. That got tiring. That has to affect my judgment.

Yet, after a few days for rest and reflection, I’d have to rate the 225th General Assembly pretty highly. There were only a couple of “frequent fliers,” although they seemed to bother me more because I was watching them on my computer than they would have if we had been there in person. As I think back on it, the Assembly took some significant actions. There were probably 200 or more votes. (I could have gone back and counted them, but I didn’t.) These are the 12 that I think are the most significant.

1. Appointment of a Commission to merge the Presbyterian Mission Agency and the Office of the General Assembly. That was the recommendation of the Report of the Special Committee on Per-Capita Based Funding and National Church Financial Sustainability. However the Assembly’s Financial Resources Committee decided that it should be a task force instead, meaning it would have little, if any, power and would be limited to making recommendations to the 2024 General Assembly, essentially kicking this can down the road for at least two more years. This is a complex situation since these are two complex organizations. While I have some misgivings that I’m not really able to explain or articulate, I strongly believe this was the right thing to do. We are not the same church we were when we established our current structure. It makes sense to me to merge these two agencies and hopefully streamline our structure. It can be done. There may be wailing and gnashing of teeth, but it can be done.

2. Raising Per Capita to $9.85 in 2023. The original proposal would have raised General Assembly per capita to $9.61 next year. That in itself is a significant jump from the current rate of $8.98. Each morning’s plenary at the General Assembly began with a financial report indicating the effect of the previous days’ actions on the per capita and mission budgets. If commissioners were paying attention, they would have seen that approving studies, establishing task forces, and appointing administrative commissions had financial implications, meaning that the per capita rate would have to go up to cover these costs. In previous Assemblies, there would be occasional comments by commissioners that raising per capita would be hard on their home church, so maybe the Assembly should be a little more cautious in spending money. I don’t remember hearing anything like that this year. It’s not that the actions taken aren’t appropriate or defendable. The reality is that they come with a cost. It was also surprising to see per capita drop by 5 cents to $9.80 in 2024. That’s the result of the Assembly deciding to make the 2024 General Assembly a hybrid meeting once again.

3. That would be my third highlight of this year’s GA (though these really aren’t in any particular order): having the 2024 General Assembly meeting as a hybrid event, but with committees meeting online and plenaries held in person. The cost savings come because this was originally budgeted as being held completely in person. I’m not sure I’ve ever seen a drop in the per capita apportionment from year to year before.

4. Approval of New Rules for Discipline. The Form of Government was revised in 2010. The Directory for Worship was revised in 2016. Covid delayed this effort by two years, but this year, we finally got around to approving a revision to the Rules of Discipline, changing the title along the way to Rules for Discipline. Although important, it’s still probably the least read section of our constitution. Most people ignore it until they need it.

5. Writing a New Confession dealing with racism in the American context. This one may take a while, as the committee given this task doesn’t have to be named until December 31, 2024. Nevertheless, this is a significant step. The Confession of 1967 mentions racism. The Belhar Confession deals mostly with racism but comes out of a South African context. Writing a new confession is significant in its own right, but saying, essentially, that we as white Christians need to directly address systemic racism feels like a big step.

6. If that’s a big step, offering an apology for racism is a huge step. Yes, it’s only words, but words matter. We’ve had study papers and pronouncements in the past. Maybe we’ve said essentially the same thing before. Somehow, this feels different, perhaps more honest. I find the Litany of Repentance, part of RGJ-08, On Offering an Apology to African Americans for the Sin of Slavery and Its Legacy, to be particularly moving.

8. Changing Honorably Retired to Retired. This one hits close to home since the “R” word has crossed my mind. I get this. Some Honorably Retired ministers are less than honorable, and it seems inappropriate, if not wrong, to apply the word honorable to their status. The thought is to simply call those who are retired retired.

9. Requiring councils to have policies on anti-racism and non-sexual harassment. The Advisory Committee on the Constitution recommended against taking this step not because they’re racists or like to bully people but rather because it starts to turn the Book of Order into more of a manual of operations. In spite of that legitimate objection, I think it’s appropriate for us to do this. To be honest, though, I’m not looking forward to doing the work or what it’s going to take to get local church sessions to adopt these policies. It’s been hard enough to get sessions to adopt sexual misconduct and child and youth protection policies, and we certainly don’t have 100% compliance with those two requirements, even though they’ve been part of our constitution for years.

10. Continued selective divestment from the Fossil Fuel Industry. You might call this a compromise solution. You might call it cowardly. Rather than mandating complete divestment from the Fossil Fuel industry, the Assembly voted to divest from an additional five companies. The feeling of a majority of the commissioners is that it makes more sense to retain our investments so that we can have a “seat at the table” and engage companies in conversation with the hope and with the goal that they will adopt more environmentally-friendly or environmentally-sound practices. That might be wishful thinking. It can be thought of as practical and pragmatic. Maybe it just represents hope.

11. Requiring 12 weeks of paid Family Leave. That was the original recommendation of the Family Leave Task Force. The Health, Safety, and Benefits Committee dropped that and simply called for required family medical leave without specifying any particular length of time. People had different opinions about whether this should be 6 weeks, 8 weeks, 12 weeks, or even longer. The Assembly spent a fair amount of time on this, with a fair number of proposed amendments. Eventually, they settled on 12 weeks. Our presbytery’s policy calls for 8 weeks. If this is eventually approved by a majority of presbyteries, we will have to change our policy. Since there was some resistance to taking this step, it will be interesting to see how the vote turns out.

12. Reject attempts to reduce, limit, or eliminate access to abortion care. Even 10 years ago, this would have been a more contentious issue, but a number of the people who would have strongly opposed this language have left our denomination. There were a few attempts to amend this language but they were strongly defeated. Support for access to abortion may still divide us, but it does not divide the PCUSA as it once did.

I could have fairly easily listed 15 or maybe even 20 items, but I’ll stop here. It should be noted that items 4, 8, 9, and 11 still have to be approved by a majority of presbyteries before they will take effect because they will require changes in the Book of Order. Typically, we would do that at the February presbytery meeting following the General Assembly. At this point, we’re planning to have that meeting online and not in person.

All the others items were actions of and by the General Assembly. In some ways, they speak to the church, and in other ways, they speak for the church. We are not bound by them, but we should be informed by them. Whether you agree or disagree, you may want to go to PC-Biz and see what the Assembly actually said before you get too excited or too upset.