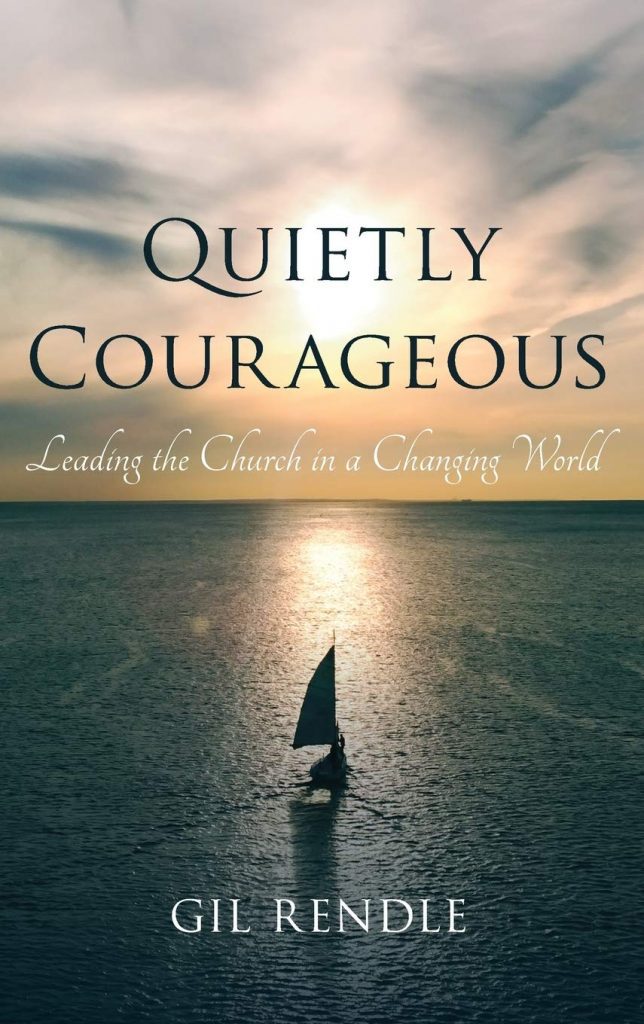 The book Quietly Courageous by Gil Rendle has been one of the most helpful ones I have read in the last year. Even though it was published in 2019 before the pandemic, it helps me to better understand the world around us.

In a number of different ways, Rendle points out that the postwar era or perhaps the years from the Depression until the late 1960s/early 1970s were an aberration. That’s the time when churches were growing. We built larger sanctuaries or added on to our buildings to have space for more Sunday school classes. We started new churches with the idea that they would grow. Pastors expected that while they might start out serving a small, rural church or as an associate pastor, after a few years, they thought they would move on to serve a mid-size church, and then after a few more years, they would move on to serve a large church. That’s how they imagined their career path.

For maybe 20-40 years, that’s how things worked. Or at least that’s how we expected them to work. That was the world we knew. That was how we were trained. However, that era is over. We need to do things differently. We need to shift our expectations. We need to let go of our assumptions because they no longer apply.

Rendle encourages us to see that within the long arc of church history, that era was unusual, abnormal, atypical. We shouldn’t measure ourselves or our churches by those standards. That wasn’t the norm, and it’s not going to be the norm moving forward. In some ways, I already knew that. Rendle’s book drives that point home and helps me to better articulate that reality – what we might call the new normal. Although, post-pandemic, I’m not sure that we have yet to arrive at a new normal – or even if normal really should be the standard we aspire to.

Rendle also points out that while you don’t have to plan to grow, you have to plan to shrink. If you’re growing, you can almost just make it up as you go because there will always be more people and more money coming in and most of the things you try will work or you’ll have enough people around to make them work. However, if your membership and your income are shrinking, you have to be more intentional and more strategic. In some ways, the report of the PWV Financial Sustainability Task Force can be thought of as a plan for how this presbytery can shrink gracefully and faithfully while still providing essential services and continuing support for our churches and pastors.

He also gives what I thought was a helpful analogy about a boy living on a farm whose mother sent him out to the barn one night to check on the livestock. He came back to her and said he couldn’t do it because it was dark and he couldn’t see the barn. She gave him a flashlight and said that he could use it to help find the barn. He came back again and said he couldn’t do it because the flashlight didn’t shine all the way to the barn. She said that he only had to go as far as the flashlight shined and then shine it again and go that far, and eventually he would get to the barn. (At least that’s the essence of the story. Rendle tells it far better than I do.)

To me, that makes sense. I do not know what this presbytery is ultimately going to look like. I can only see so far ahead. I only have a general idea of where we need to go. But that’s enough. It doesn’t stop me – it doesn’t stop us – from acting. We go as far as we can see, and we trust that when we get to that point, God will show us what we need to do and where we need to go next. Maybe we’ll need to make some adjustments when we get to that point. However, the boy can eventually get to the barn, and we can and will eventually get to where God wants and needs us to be.

The book is significant enough that I want to read it again. Last summer, I offered a book study on White Fragility by Robin DiAngelo. I’d like to do that again with Quietly Courageous. I’m thinking about offering an opportunity for anyone who’s interested to talk about this book at 7 PM on the four Tuesdays in September, which would be the 7th, 14th, 21th, and 28th. Last year, we did that on Mondays, which may have less conflicts than Tuesdays. We also did that in August, which may not be as busy as September. At this point, these days work for me. I’m also open to having a late morning or afternoon option if that would be better for some people.

Let me know if you’d be interested in such a book study and whether a late morning/afternoon option would be better for you. Even if you’re not interested in doing the book study, I’d encourage you to read the book. I think we can learn a lot from it.