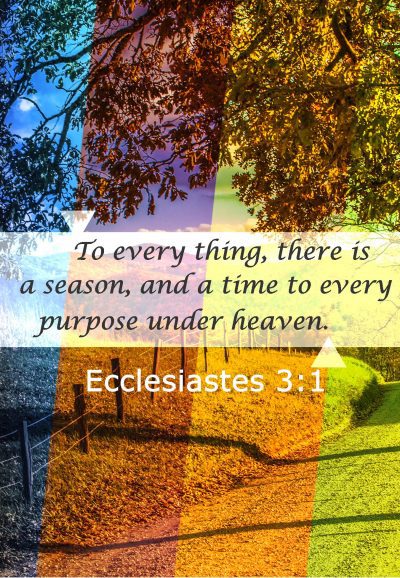 What season is it? We might say that technically it’s still spring since summer doesn’t officially start until the summer solstice, which, at least according to my calendar, falls on June 21. I’m not really talking about the weather or the amount of daylight we get each day, however. I’m thinking more about what’s going on both inside and outside the church.

I know many churches used to offer kindergarten classes. That was an important ministry back in the day when there was no public school kindergarten. Once the public schools started offering kindergarten classes, these programs often morphed into nursery schools and preschools. That made sense because there was still a need. Since the 2012-2013 school year, though, there has been universal Pre-K for 4-years-olds in West Virginia. You can argue that there is still a need for preschool programs for 3-year-olds, as well as child care for even younger children, but the needs have changed. It’s a different season.

I’ve heard of churches that used to offer huge yard sales because churches in other states would send them boxes of used clothing and “gently used” items. There were churches that used to hold giant craft shows, where church members could sell their handmade crafts with the proceeds going to mission. Now, those outside sources are no longer able to provide items for sale. The ladies that used to do crafts are now working outside the home, both the men and women who loved doing crafts now have physical limitations that no longer allow them to do what they once did, or unfortunately, many of these folks have passed on to their reward. It’s a different season.

So, what season is it? The answer to that question depends on the answers to at least two other questions: What do our neighbors and/or our community need? What are we able to do?

Maybe our neighbors don’t need a preschool or a craft show, but maybe they could use English as a Second Language classes. Maybe there’s a need for an Alcoholics Anonymous or Narcotics Anonymous group in our neighborhood. Maybe it would be helpful to have a support group for parents raising children with autism or for grandparents raising their grandchildren. We could find out by asking our neighbors (what a concept) where they’re struggling or what kind of services they could they use that they can’t find or can’t afford. We could also talk to the principal of the local elementary school and ask them what needs they see among their students. We could also talk to members of our city council, our mayor or our county commissioners. Chances are they know more people than we do, and they may have a wider – or at least a different – perspective on the needs in our community.

Part of what we are able to do depends on who we are able to partner with or perhaps who are we willing to partner with. Maybe there’s a Baptist church down the road or a Roman Catholic Church across the street. Maybe we’d rather not work with them, or maybe they’d rather not work with us. We may think that’s the case based on what happened 10, 15, 20 or maybe 50 or more years ago. But if it’s a different season, maybe their answer will have changed, or maybe our answer needs to change. Maybe we need to admit we need help, that we’re no longer able to do what we used to do. Maybe we need to admit that the problems we’re facing are bigger than either one of us can manage by ourselves.

Just because we no longer can do what we used to doesn’t mean that we have to give up and close our church. That may be a faithful response if we no longer have the spiritual energy to keep going. However, it may mean we simply need to do something different and perhaps partner with other churches, community groups, or agencies to get that done. I think it depends on how we answer the question: what season is it?