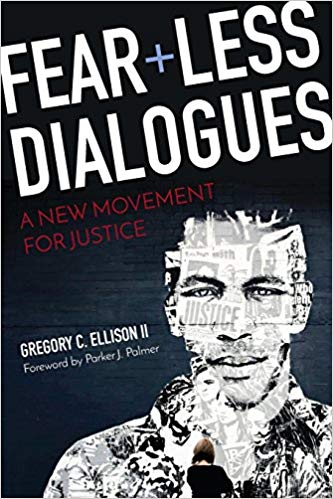 One sign of a good book, a good movie, or maybe even a good meal is that you keep thinking back on it, reflecting on what you’ve learned and being challenged by its insights. That’s been the case with the book Fear + Less Dialogues by Gregory C. Ellison II. Ellison also led a day-long workshop based on his book with one of his colleagues at the Mid-Council Leaders Gathering in Chicago that I attended earlier this month, so I may be conflating these two different experiences. Nevertheless, I keep thinking about the book, even now three weeks later.

The point he’s making is that we don’t necessarily really see the people around us. We look past them. We overlook them. Or maybe we look through them. They are invisible to us. That may be partly about race, but it’s certainly not limited to that.

I think about the First Presbyterian Church of Hays, Kansas. They were one of the churches that went through New Beginnings, a process that involved an outside consultant coming in to interview the pastor and various church members, tour the church’s building and the neighborhood, and review the church’s calendar and finances. When the session was going over the consultant’s report, they had a number of surprises. One of the main ones was the consultant noted there were a significantly large number of senior citizens in their neighborhood and maybe the church could start some kind of ministry with and to them. The elders were puzzled about that, wondering who and where those people were. Finally, someone realized that about a block and a half from the church, not directly across the street but still visible from the front door because there was a vacant lot in between them, was a large senior citizen’s apartment complex. People could see that building each time they went out the front door of the church. But the reality was they didn’t see them and didn’t think about the people who lived there.

I also am reminded of an experience I had at least 15 years ago, during my first tour of duty in West Virginia. This was back in the day when cell phones didn’t take pictures – or at least the cell phone I had didn’t take pictures – so we were still using the old-fashioned camera that required film. It was about 10, maybe 10:30 p.m. on Christmas Eve when my wife discovered we didn’t have any film for our camera. Apparently, I had been told earlier in the week that I needed to buy film, a charge I dispute; nevertheless, I was sent out at that late hour to buy some film so we could take pictures of our family opening presents the next day.  I ended up at Walmart, probably because it was the only place still open that late on Christmas Eve. The place was packed, which didn’t really surprise me, but what did surprise me was that it was full of Hispanic men, women, and children. The only place I had ever really noticed any Hispanic people before was in Mexican restaurants, but I remember thinking there aren’t that many Mexican restaurants in the whole state of West Virginia that would account for all these people. They were obviously there, but I hadn’t seen them.

Who are the people you don’t see? Maybe more specifically and more importantly, who lives in the neighborhood around your church? Many of our churches were built in an era when people walked to church. Among other things, that may mean the church now lacks adequate parking, or it may mean the church has so much parking that we end up keeping our neighbors at arm’s length. If we’re driving to church, particularly if we no longer live in the same neighborhood, we may not see any people. We may not be aware of who really lives there, what they need, or what challenges they face. The flip side of that is our neighbors may not know anybody in the church. All they see is a building that has a few cars parked on the street or in the parking lot on Sunday morning and Wednesday evening. We don’t know each other.