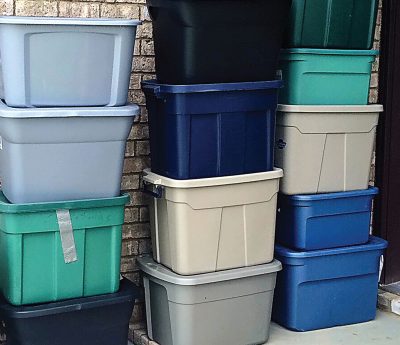 We did it. Well, Amy Robinson, Maureen Wright, and Rocky Poole did most of it, with substantial help from Medina Poole, Rocky’s wife, who came down the final few days to help us sort through the old financial records to make sure the papers that we no longer needed to keep that contained personal information got shredded and those that didn’t got recycled.

Let’s just say the Presbytery of West Virginia accumulated a lot of paper over the years. We sent more than 1,600 pounds of paper to be shredded. At least that much went to recycling. We will also be sending at least 16 boxes of records to the Presbyterian Historical Society.  I would suspect that all adds up to almost 2 tons of paper. Let that sink in: almost 2 tons of paper.

And we are not completely done yet. In early September, it was easy – or perhaps I should say easier – to sort through the accumulated files, to read or at least scan articles that I had torn out of magazines or printed off of the internet, to look at notes from speakers at various conferences and seminars that I had attended over the years. Doing that brought back memories and made me realize how much Covid had changed things in some ways but not in others.  There was time to reflect on whether things were worth keeping or should just be recycled. Almost all ended up being recycled, and what wasn’t will probably end up being recycled the next time I go through them.

The last week, however, I at least was more deliberate or perhaps more focused. Others may have gotten there before me. At some point midweek, though, the triage stopped. Everything went into boxes. I was reminded of a saying of one of my seminary professors, who when asked a question that interrupted his lecture would respond, “We will deal with this later.”

But it all worked. Everything that we wanted to keep or to get rid of was carried out of the building in one way or another. I was basically the last man standing. I took my last 8 boxes of books and the pictures that had been on my office walls out of the building around 4 p.m. on Sunday, October 9. Since Maureen was scheduled to sign the papers and hand over the keys at 2 p.m. the next day, I guess I still had plenty of time, but I was glad to be done. There was a sense of relief, a sense of accomplishment, and at least a little sense of sadness.

At our staff meeting on Tuesday, someone suggested that maybe we all had a sense of post-traumatic stress disorder. That makes sense, although it may be somewhat of an exaggeration. We certainly didn’t live through a war or survive a hurricane or anything like that, but it was certainly stressful and I suppose in its own way it was traumatic. You could also say that what we were feeling was grief. Although it would be an exaggeration to call the office a sacred space, it was a good space. I will not miss worrying about air conditioners, power outages, or internet disruptions. I will miss the casual conversations, sticking my head into someone’s office to ask a question when something came up. We will still be talking on the phone, sending texts and emails, and seeing each other on Zoom meetings, but it will be different. And that’s OK. We will figure it out. We have been figuring it out.

Did everything go smoothly? No. There were some bumps in the road. If we had a chance to do it again, it would be much easier and we would do some things differently. I tell myself I would start the sorting and the triage of my books much sooner. The reality is I probably wouldn’t do that. As one of my college friends once said, “I like to think I work well under pressure, but I really don’t start to work until I am under pressure.”

We’ve entered a new stage or maybe started a new chapter of ministry. Some things will change. Most won’t. It’s still the same phone number, still the same email address. We still have the same challenges. Perhaps we can be nimbler, more flexible, more responsive. That remains to be seen.

Thanks to the Administration Committee for their guidance and their support through this process, and thanks to the Trustees for their good work in helping to sell the building. Thanks to all of you for your patience as we work through this transition. Certainly special thanks go to Amy Robinson, to Maureen Wright, to Rocky Poole, and to Medina Poole for all their hard work that made this possible. The Presbytery of West Virginia is grateful to you. And I am too.