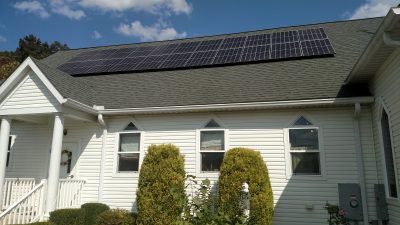 The Glenville Presbyterian Church dedicated the solar panels on their roof this past Sunday, September 22. They’re the second Presbyterian church in our presbytery and third in the state to do so. (Spencer and Shepherdstown are the other two, in case you were wondering.)

This is a fascinating story to me for a couple of reasons. One, in the material they distributed – assuming I read it correctly – the panels on the Glenville church generated more electricity than they had used at least so far in the month of September. Now, granted, the first part of September was hot and dry with lots of sun and no appreciable rain. Most months won’t be like that, I hope. Nevertheless, they seemed to have made money in September by generating more electricity than they used. That may not happen again, yet it sure seems likely they will see significant savings on their electric bills, eventually – perhaps in 10-12 years – paying for the cost of these solar panels.

Second, Glenville and Spencer are among our smaller congregations. As of the end of last year, Glenville listed 20 members and Spencer 8. What a witness! I suppose if you have more members, that means there are more people you have to convince that this thing or anything you do is a good idea. Nevertheless, these two churches stepped out in faith to witness to their faith. They are taking positive steps to care for our environment and to invest money now that will pay off in the long run.

What is your church doing to care for our environment?

For refreshments after the dedication ceremony, the Girl Scout troop at the church prepared, among other things, solar s’mores and solar tea. More importantly, the cups and utensils they used were biodegradable. At the Presbytery meeting in May, First Presbyterian Church in Morgantown was using recyclable cups. In both cases, they looked like normal cups to me. Maybe they cost a little more, I don’t know. Perhaps they were more difficult to find, although a quick look at Amazon reveals that you can purchase all kinds of recyclable, compostable stuff. Granted, you may want to support your local businesses, but if you ask them, they may be willing to make these items available for you and the wider community.

I might also ask, what are you doing as an individual and a family to care for our environment? Several years ago, the Book of Order was amended to include caring for creation as one part of the “Ministry of Members” G-1.0304. Maybe you didn’t notice that, or maybe you don’t care. However, our denomination has decided that “caring for creation” is just as significant as “taking part in the common life and worship of a congregation,” “studying Scripture and the issues of Christian faith and life,” and “supporting the ministry of the church through the giving of money, time, and talents,” among other things. (All from G-1.0304.)

Starting early in our marriage, my wife and I have been recycling religiously. At first, it seemed strange to be washing out tin cans, rinsing out milk jugs, and putting the newspaper in a separate container rather than just throwing it in the trash. Now, though, all that has become second nature. I don’t even think about it; I just do it. I will admit, however, that I still have a long way to go. I am not as zealous as some in declining the use of straws. Although I did get a bamboo, reusable straw at a festival on Charleston’s West Side earlier this year and I carried it around in my car for a while, it seems to have disappeared. Occasionally, it worries me that I have an awful carbon footprint because of all the miles I drive. I still keep driving, though, because I think it’s important to visit our churches and the minister members of our presbytery.

If you want to learn more about putting solar panels on your church or about being an Earth Care congregation, contact the folks at Spencer or Glenville. Even if you’re not prepared to take that big step, there are lots of smaller steps you can take as a church or an individual. This is something we need to think about, talk about, and pray about, and, more importantly, this is something we all can and need to do. 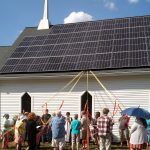 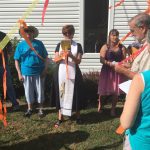 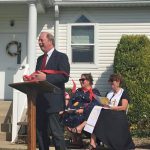