GA Opening Worship donates more than $50,000, including our May meeting offering

GA Opening Worship donates more than $50,000, including our May meeting offering 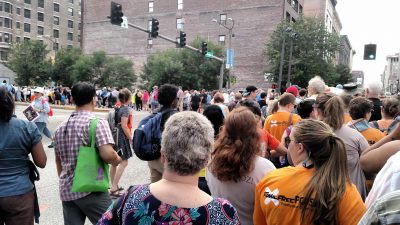 Presbyterians march in the ‘Freedom Should Be Free – No Cash Bail’ rally at General Assembly. Photo by Ed Thompson

This week, we learned from the PC(USA) Associate for Mid-Council Relations, Tricia Dykers Koenig, that the offering received at the General Assembly Opening Worship on June 16, along with donations made online, enabled the PC(USA) to donate well over $50,000 to Arch City Defenders and The Bail Project. Both of these organizations work against mass incarceration by purchasing the freedom of persons who languish in jail – disrupting families, losing jobs – because they are too poor to afford the fines, fees, or bail that most Presbyterians can pay without difficulty.

The $36,505.82 received on Saturday morning alone – which included donations from some presbyteries that received offerings prior to General Assembly like ours at the May 17 Presbytery meeting that totaled $890 – was three times the highest amount previously given at that service, demonstrating the commitment of Presbyterians to the cause of justice and freedom for poor people caught up in the cash bail system. Hundreds, including several members of the PWV delegation, marched from the convention center to the justice center to accompany the Stated Clerk as he presented the initial checks.

Congregations and individuals can still participate in the offering by sending checks made out to PC(USA) and marked “General Assembly Offering Fund” to Lock Box 733, Pittsburgh, PA 15264. It is also hoped Presbyterians will go and do likewise in their own areas, because St. Louis is not the only place where poor people experience hardship due to the cash bail system. For information about getting started, contact The Bail Project.