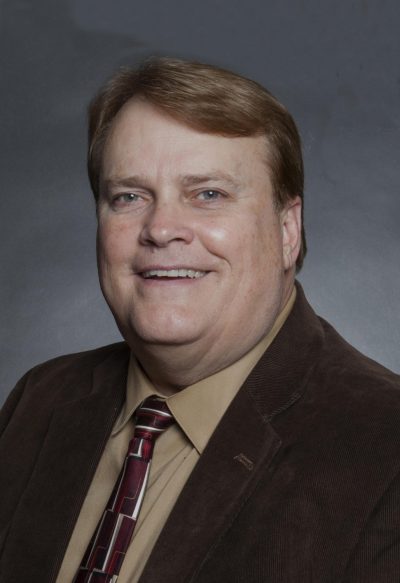 Rev. Dr. Parrish L. Bridges began his new call as Pastor with First Presbyterian Church of Huntington in September 2020. When asked what had attracted him to the church, Rev. Bridges said that the PNC was fantastic and that he and his wife connected really well with them. He resonated with the church’s sense of mission and their desire to be faithful to God. He finds the downtown location of the church to be a plus.

Rev. Bridges is excited by the church’s support of City Mission, Recovery Point, Harmony House, and the Cabwaylingo ministry. The church has converted its property near the church into a meeting place for AA and other recovery ministries. In addition, the church has a great staff and is doing amazing work with music, worship, and children/youth ministry.

It has been a challenge coming to a new church in the midst of a pandemic, but Rev. Bridges reports that the people of the church have been amazing in finding ways to cope with the pandemic and still remain faithful. He is encouraged by the number of people in the congregation with great leadership skills and an enthusiasm to serve God. Since his arrival, the church has upgraded its video and audio systems and greatly improved its use of livestreaming.

This is a somewhat bigger church than the last one he served and therefore has a much wider range of possibilities for mission and ministry. It has a wonderful foundation and tradition of mission in place, and Rev. Bridges hopes to build on that. He sees the church growing in membership, in ministry, and in mission. His dream for the church includes developing more small groups and increasing Biblical literacy. In past churches, he has had good success using the Bethel Bible Series, and he hopes to do something similar here.

When asked about his first impressions of Huntington and West Virginia, Rev. Bridges noted that he is enjoying the Southern hospitality and milder winters. He loves the beauty of the untouched land, mountains, and forests of West Virginia. He is enjoying being part of a college town and rooting for Marshall University. He likes that Huntington is big enough to have lots of opportunities and conveniences but is also not that far from a drive in the beautiful countryside.

Rev. Bridges was born in Bakersfield, CA and raised in Ventura. Following graduation from Ventura High School in 1982, he sensed and responded to the call of God to enter into pastoral ministry. He later enrolled at Tennessee Temple University in Chattanooga. Even though Rev. Bridges was raised as a Baptist and ordained in the Southern Baptist Convention in 1987, he decided in 1995 to seek ordination in the PCUSA for future ministry in the Reformed Faith tradition. Among the reasons he cited for changing was the PCUSA’s openness to the ordination of women and the emphasis on Reformed worship.

Rev. Bridges married his high school friend, Pamela Darden, in 2016 at Coronado Island, CA. Pamela is a piano/music instructor and has worked with elementary age children in after-school programs in Ventura and the Pt. Loma, La Jolla, and Terra Santa areas of San Diego. She has also served as a worship leader/music coordinator in various churches over the past 30 years in Alabama and Ventura.

Rev. Bridges and his wife have three daughters, one son, and three grandchildren. One daughter resides in Elmira, NY and the other two in Smiths Station, AL. Their son resides in Eagle Pass, TX.

For nearly 14 years of ministry in the Susquehanna Valley Presbytery in Upstate New York, Rev. Bridges served in various capacities: Theological Education Fund Representative, Transformation Ministry Team member, Committee on Ministry member, and trained Healthy Congregations Facilitator. In addition, he served on the Synod Council and as a Commissioner to the Synod of the Northeast. His primary work was as the chair of the Network Group, helping to implement the “New Way Forward” adopted/completed by the Synod on the Northeast in 2013. The focus of the work involved finding new ways to encourage and support churches and presbyteries to do mission/ministry beyond geographical boundaries within the Synod.

Rev. Bridges and Pamela are very excited about the opportunity to make West Virginia their new home and serve at the First Presbyterian Church of Huntington.