Getting to know our newer pastors: Rev. Steve Peters

Getting to know our newer pastors: Rev. Steve Peters 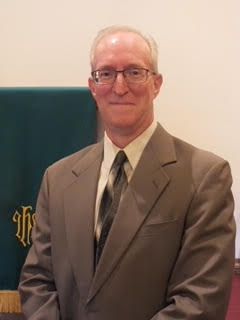 Perhaps it is easier to see the hand of God when things happen suddenly and unexpectantly. Yet, we can also see the hand of God when things are moving more slowly but surely. Steve became acquainted with Beechwood Presbyterian Church through his wife, Tina, who has served as their secretary for several years now. When the church found out Steve was ordained, they ask him to fill the pulpit while their pastor was on vacation. Over time, Steve became a regular pulpit supply for when the pastor was away.

Shortly after the former pastor, Rev. Rick Johnson, retired, the church asked Steve to be their regular Sunday preacher. That was in May 2021. In April 2022, Steve was asked to be their Stated Supply Pastor. He agreed. This new relationship was officially recognized with a special service in July 2022.

Steve was born in Cleveland, Ohio. When he was 2 years old, the family moved back to their roots in southern West Virginia near the towns of Whitesville and Marsh Fork. Steve’s great-grandmother was a member of the First Presbyterian Church of Whitesville.

Steve was raised in the Southern Baptist tradition. He rededicated his life to Christ at the age of 32, some 25 years ago. With that rededication came a hunger to know more of God and a hunger to serve. Steve became involved with the children’s ministry in his church in a program named AWANA (Approved Workers Are Not Ashamed). He describes this ministry as being similar to Boy or Girl Scouts but based on Christianity and the Bible.

In God’s good time, Steve became involved with the church youth group and then later still with adult ministry and preaching.

Steve and Tina are celebrating 39 years of marriage this year. They moved to the Parkersburg area in 1992 for Steve’s job. They have two grown children. Their daughter, Traci, lives in Columbus, Ohio with her husband. Their son, Matthew, has just moved to Columbia, South Carolina.

The biggest adjustments/challenges that Steve has had with this new call to Beechwood have been trying to juggle this added work with his full-time work as an insurance adjuster and also adjusting to Presbyterian polity and traditions.

When asked about how this church differs from past calls, Steve said that the average age of this congregation is higher. He added that there is a lot of room for growth in the youth and children’s ministry.

Steve commented that some of the things he likes best about Beechwood are that the people are very welcoming. They welcomed him with open arms as if he had always been a part of their family. He appreciates the facilities and ample room around the church for parking. There is a lot of room for growth and outreach. Steve looks forward to joining Beechwood in doing great ministry together.

When asked about his dreams for the ministry that he and the church will be doing, Steve talked about the area around the church being depressed. There are a lot of renters and transient people. There are also dependency issues. People are hurting. Steve wants the church to be a lighthouse of salvation and hope to the community.

The church is already doing good mission work in that area. Their food pantry is serving about 50 families a month. They also have two apartments available as temporary housing for families that have lost their home due to fire or floods. The apartments are also sometimes used by out-of-town families who have family members in the local hospitals. Steve hopes to build on this good outreach foundation so that the church can be a lighthouse of salvation and hope for the whole community.

May God continue to bless the ministry of the Rev. Steve Peters and the Beechwood Presbyterian Church.